The Cat in the Table 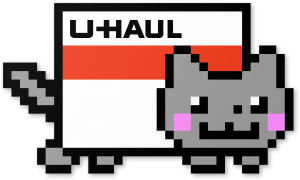 My sister had a gray toy cat as a kid, but she wanted a real kitty. Our dad asked around and found a charcoal-colored kitten with a white spot on his tummy. My sister named him Starbrite, after her favorite toy. Starbrite was our only cat for a number of years (though we also had a dog.) He was a neutered indoor housecat, but he loved to get outside and roll around in the garden.

A year or two after we got Starbrite, we moved to a new house, just a couple of miles away. To keep Starbrite from getting outside during the move, my mom locked him in the basement bathroom, and put a sign on the door saying “Cat Inside: Do Not Open”. Well guess what? The stupid movers opened the door. We weren’t sure when it happened, but by the time we got everything moved over to the new house, Starbrite was gone.

Fighting back tears, I helped my mom and sister search the old house for the cat. We looked inside and out, but there was no sign of Starbrite. After a while, we packed up the remaining items and went over to the new house. There we tried to unpack and take our minds off of the cat. After an hour or two of unpacking, my mom and sister went back to the old house to look again while my dad went outside to work on the lawn. As I puttered around the living room, I heard a meow. It sounded like it was coming from outside, so I went and looked.

I didn’t see any cats outside, but I could still hear a very faint meow. Now it sounded like it was coming from inside, so I went back into the house. The meows were intermittent, but they were coming from the corner of the living room. I looked behind the table in the corner, but there was no sign of Starbrite. Just more meowing.

I listened carefully to try to tell where the meowing was coming from. Then I looked at the table itself. It had a built-in roll-out ottoman. I pulled out the ottoman and got down under the table. When I did, I could see there was a cavity within the table. I couldn’t see the cat, but I could hear him. Still, I didn’t want to give up hope until I saw him. I ran to the kitchen and opened a can of tuna. I brought the tuna to the table and called his name till he came out.

When he finally slinked out of the table cavity, Starbrite looked around the unfamiliar house, freaked out, and jumped back inside the table. He didn’t even touch the tuna. Still, I had seen him with my own eyes, and I knew he was okay. I went outside and told my dad the good news. A few minutes later, my mom and sister came back to the new house. They were both in tears, since there was no sign of Starbrite at the old house. They certainly didn’t expect him to be at the new place. But there he was, shaken but safe. It must have been quite an experience for him, traveling to the new house inside of a table, but he made it, and that was all that mattered.

Starbrite went on to live another decade or so, staying with my family up till I went to college. After his ordeal, my family got a lot wiser when it came to moving cats. Never again will we trust a sign on a door to keep the cat(s) safe.