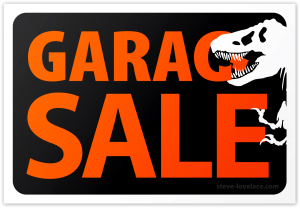 I was probably around 13 or 14. My parents decided to have a garage sale, I went through my closet picking out all the old toys I didn’t want anymore. Now when you’re that age, right on the cusp of high school, you think you’re a full-fledged grownup. I was not at all nostalgic about my childhood, so I was pretty ruthless in getting rid of my toys. I would have chucked them all if not for my mom and my sister. Nevertheless, I pared my toys down pretty hard, including my collection of plastic dinosaurs.

I had about seven or eight of these dinosaur toys. They were hollow plastic figurines nine to twelve inches in length. They weren’t name brand toys. In fact, they weren’t even a matching set of toys, like the Astrosniks I collected. These were just some toys that my family had bought for me over the course of several years. My toy dinosaurs were well-loved, and well-worn, but as a nascent teenager, I had no interest in them. So I put them in the garage sale, and sold them all in an afternoon.

A couple of years later, I was at a thrift shop down the road, where I spotted my toy dinosaurs in a bin. I knew they were mine because it was the same mismatched collection of toys. Like I said, these particular dinosaurs were not a set. They were made by different manufacturers in different years and bought and different times. They were only together because they were mine. At least I suspected they were. So I picked up my favorite dinosaur, the T-Rex, and looked for a small hole in his chest, a manufacturing defect. Sure enough, the hole was there. It was definitely my T-Rex. Still, I didn’t buy it. I was a high-schooler, and I didn’t need a dinosaur toy.

Just a couple of months later, my dad and I were at an antique store, directly across the street from that same thrift shop. There I saw my dinosaurs again, for three times the price. I wasn’t about to pay more for them now, and besides, I thought, why not let some kid buy them? A second grader would enjoy these toys a lot more than a high school junior.

Four or five years after that, I went home from college to hang out with my parents. We took a road trip down Grand River Avenue toward Detroit. There we stopped in a little town called Howell. There, inside of a new antique mall, were my garage sale dinosaurs. Again I checked for the hole in the T-Rex. It was there. This was my collection. There might have been one or two dinosaurs missing, but there were one or two extra to make up for it. It had been so long since I owned them, I wasn’t quite sure. But I knew the T-Rex was mine, as well as the apatosaurus and several others. Still I was hesitant to buy them. At this point, they were worth a whole lot more than I had sold them for.

“Come on, Steve,” said my dad. “This is the third time you’ve run across the toys. I think the universe is trying to tell you something.”

“It could just be a coincidence.”

“Let me buy them for you? Will you let me do that?”

Reunited with my childhood toys after a decade, I decided to hang on to them. Maybe I could pass them on to my kids. So I put them in a box. When it came time to sell all my stuff and move to Samoa, I didn’t dare put my dinosaurs in the auction. Nor did I try to sell them when I got back to the mainland. Instead I’ve hung on to these mismatched toys well into my thirties. When you’re fourteen years old, you want nothing to do with your childhood, but as you get older, you realize that some pieces of your youth are worth holding onto.