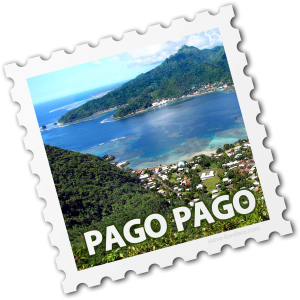 The Samoan Islands are smack dab in the middle of the Pacific Ocean, so pretty much everything but coconuts and bananas have to be shipped in from off-island. So when homesickness kicks in, the only thing to do is to resort to mail order. And while dealing with the post office is rarely ever a pleasure, mail order in Samoa has a whole host of interesting issues.

Where the Streets Have No Names

As I mentioned in a previous post, the streets in American Samoa have no names. Nor do they have addresses or mail delivery. With no addresses on-island, you have to get a PO Box. Or at least have access to one. (Many people I knew got their mail through their employer’s PO Box.) As for UPS and FedEx, you were pretty much SOL. It was the postal service or a cargo container.

Even after selling off 90% of our belongings at an auction and storing another 5% in a storage locker, we still had 5% of our stuff to ship. And because it was going halfway across the world, we had to wrap everything well and take the boxes to the Post Office in batches. The clerks there ranged from godawful to somewhat helpful, but none of them had a clue on how to send a package to American Samoa. (Why would they, after all?) Half of the clerks told us to use the green customs forms, while the other half told us to use the white. Once I had a clerk refuse to use a customs form at all. To this day, I don’t know the proper procedure.

After living in American Samoa for a while, I started to get homesick. Thankfully, I had occasional Internet access, so I went online to order some stuff. That’s when I discovered that most retailers don’t ship to Pago Pago. Some claim they do, but when it was time to check out, the only option was a $100+ FedEx or UPS shipment. And even if you clicked that option (out of curiosity), it would refuse to accept a PO Box address. Then there were the websites that wouldn’t tell you what shipping service they used. And then there were the sites whose online forms listed all 50 states, DC, Puerto Rico, Guam, US Virgin Islands, Northern Mariana Islands, military post offices and everywhere else under the US Flag. But not American Samoa. I could never be sure if this was a deliberate omission or simple ignorance on the web developers’ part.

Despite the difficulties, I found retailers who would ship to the island for a reasonable price: Amazon, Old Navy and Starbucks. I was very excited when I found out that Starbucks shipped USPS to any state or territory for five dollars. I ordered a couple of pounds and waited. Normally packages to Samoa took at least six weeks, but my coffee arrived in just a month. It was damn good, better than anything I could have bought on-island. A few months later, I went online to order some more. Lo and behold, they had added a $15 surcharge for US territories. I was disappointed, but amused. It seems I caused a rule change. I’m guessing it cost Starbucks way more than five bucks to ship to Samoa. Someone there noticed, and they changed the rule because of me.

Despite all the difficulties with the post office, both here and there, I was thankful to have the connection to the mainland US. Still, I’m happy now to live in a city where things don’t have to be shipped in on a boat.