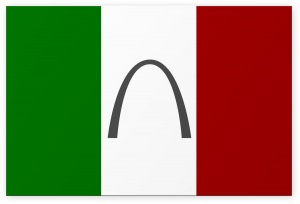 There is a large Italian population in St. Louis, and there are some very good Italian restaurants there. Though Saint Louis Style Pizza is unlike anything you’d get in Italy.

One of the pleasures of traveling is sampling the local fare. For example, you can get pizza anywhere, but if you go to New York, you’ll get a large, foldable slice, and if you go to Chicago, you’ll get a thick, cheesy pie. Just a couple hundred miles south of the Windy City, the pizza goes from very thick to very, very thin. Saint Louis Style Pizza isn’t as well known as its counterparts in New York or Chicago, but if you’re ever in that part of the world, it’s something you ought to try. Let’s take a look at what makes the pizza in St. Louis so unique

St. Louis Style Pizza has very thin crust. Cracker thin. It’s unleavened and very crispy, so you can’t fold it like you would a slice of New York Style Pizza. Instead you get it cut into little three-inch squares. Since the pizza itself is still round, this leaves little one-bite wedge-shaped corners. These are my favorites.

The tomato sauces used in St. Louis are often a little bit sweeter than elsewhere in the country, often with a little extra oregano. This is most apparent with another St. Louis staple, an appetizer known as toasted ravioli. Despite the name, toasted ravioli are usually breaded and deep fried, then served with a marinara dipping sauce. The same sauce is used on the pizza, though there’s usually not a lot of it on the pizza. Because when push comes to shove, the most important ingredient in St. Louis Style Pizza is the cheese.

My family grew up with provel cheese, and when we moved from St. Louis to Michigan in the early 1990s, my parents got blank stares when they asked for it at the supermarket. Most Michiganders assumed they meant provolone. In fact, provolone is a part of provel cheese, along with Swiss and white cheddar. Provel is, strictly speaking, a process cheese product, an invention of mid-20th century Midwesterners. It’s not an authentic Italian blend, but an American innovation. And like other process cheeses, like American cheese or Velveeta, provel cheese is soft and melty. On a fresh pizza, it is as soft as butter, though stickier with a slightly smoky flavor. To tell you the truth, it’s a polarizing taste. Some people love it and some people don’t. If you don’t care for it, you may find St. Louis Style Pizza disgusting. Though you won’t know unless you try it.

Saint Louis Style Pizza comes available with the standard set of toppings, pretty much the same list of toppings as you’d find at any Domino’s or Papa John’s across America. Though if you really want the best St. Louis pizza experience, I recommend a deluxe pizza from Imo’s: sausage, mushroom, onion, green pepper and bacon. On the other hand, a plain old cheese pizza is pretty damn good too. If you ever go to St. Louis, make sure to try the pizza. It’s one of the best things the city has to offer.