The Horrors of the Poplar Street Bridge

The Mississippi is a wide river, even as far north as St. Louis. Crossing it can be a hassle, especially in Downtown St. Louis. Since 1967, there have been four bridges downtown, two north of the St. Louis Arch and two south of it. And yet, all of the major highways are squashed onto one nightmare of a crossing: the Poplar Street Bridge. 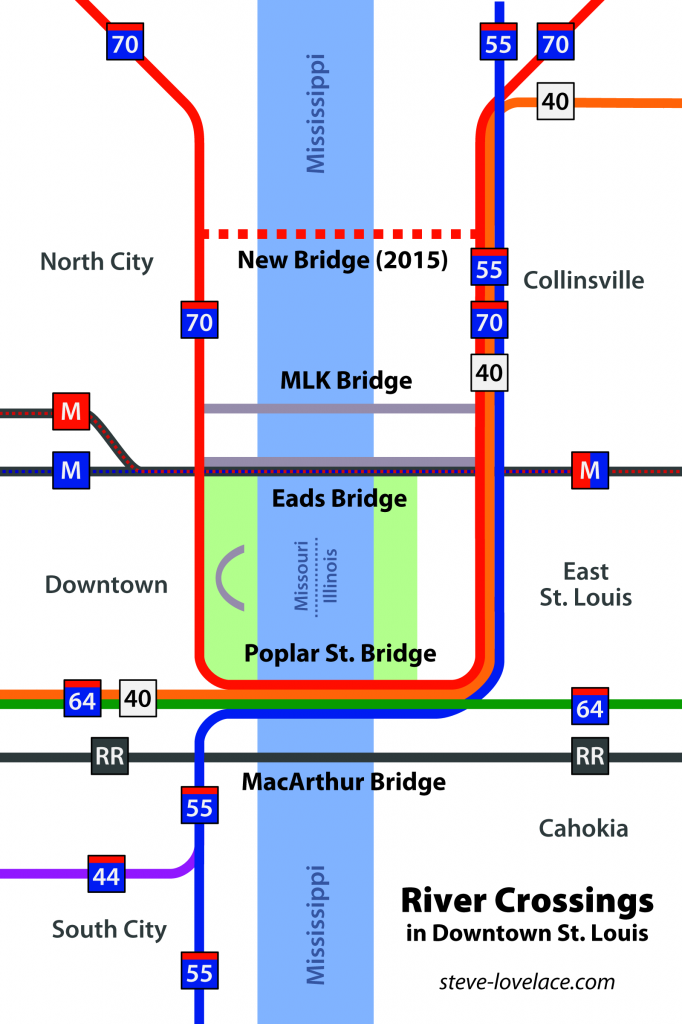 Let’s take a look at the downtown St. Louis bridges, from oldest to newest.

Completed in 1974, the Eads Bridge was a marvel of 19th century engineering. For over a century it carried passenger trains across the river. Today, it carries the MetroLink Light Rail, as well as a surface street connecting the casinos in East St. Louis to the entertainment district of Laclede’s Landing.

The MacArthur Bridge opened in 1917 for automotive traffic. A few years later, it added a second deck for rail traffic. Eventually it became a rail-only bridge, and to this day, it still carries Amtrak trains across the Mississippi. I have crossed this bridge on rail, and from the right angle, it’s possible to see the river a hundred feet below.

Originally called the Veterans’ Memorial Bridge, the Martin Luther King Bridge opened as a toll bridge in 1951. While it carried US 40 and US 66 for a while, it could never compete with free bridges. In 1990, the toll was removed, as the aging bridge was not able to handle major traffic flow. Still, it does occasionally take overflow from the Poplar Street Bridge.

The Poplar Street Bridge is officially called the Bernard F. Dickmann Bridge, but nobody calls it that. (Most St. Louisans probably don’t even know the bridge’s official name.) It’s a boring-looking concrete bridge, completed in 1967. The only thing that makes it notable is the insane amount of traffic crossing it. Basically, the Eads, MLK and MacArthur bridges are too old and decrepit to handle modern freeways, so all the traffic backs up onto this one span. The real mystery here is why it’s taken them almost fifty years to do something about it.

Having lived in both in the City of St. Louis and the suburbs of St. Clair County, Illinois, I can tell you firsthand that the Mississippi River crossings are vital to the region. And while I’m amazed that it’s taken this long, I am excited about the newest bridge. Next time I visit St. Louis, I’ll try to get some pictures to post on this blog.

Have you ever driven across the Poplar Street Bridge, or any of the other bridges in the St. Louis area? If so, let me know your thoughts in the comment section.