The Odd History of the JB Bridge 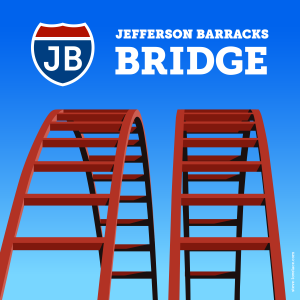 Every month or two, I have a dream about the JB Bridge. I’m not sure what it is about this bridge that’s stuck with me over the years. In many ways, the Jefferson Barracks Bridge is just another stretch of Interstate Highway, carrying I-255 from South St. Louis County to rural Illinois. But as someone who was fascinated by architecture from a very young age, the JB Bridge was an ongoing source of wonder.

In 1826, the US Army established a military base a few miles south of St. Louis, and named it for recently deceased President Thomas Jefferson. The Jefferson Barracks served as a major military installation from the Mexican-American War all the way up to World War II. For most of its history, there was no bridge at the site. Anyone wanting to cross the river had to take the Davis Street Ferry from St. Louis’ Carondelet neighborhood to East Carondelet, Illinois. Then in 1942, a group called the Lindbergh Bridge Association organized the funding of a toll bridge, named after the nearby barracks.

Building a bridge across the Mighty Mississippi is no easy feat, then or now. There is a lot of barge traffic on the river, so any crossings need to be long and high to allow for shipping. So when it came time to building the original JB Bridge, engineers used a giant cantilevered truss to hold up two lanes of US Highway 50. Living in Dupo, Illinois as a kid, we crossed this imposing old bridge many times on our way across the river. I remember it as a complex and overbearing structure, almost like a Gothic cathedral in its complexity. As a kid it fascinated me, and maybe even scared me a bit, such was its scale and form.

The original bridge was was part of a two-lane US Highway, and by the time I was born it was woefully inadequate. As the old highways upgraded to Interstates, planning began for a replacement. Or rather, two replacements. The bridge was far too important to shut down, so a second bridge was constructed alongside it. The new JB Bridge was even bigger than the old one, but to me it was less “scary”. Instead of a complex array of girders at odd angles, the new bridge featured one rusty red arch. I remember the two bridges side-by-side, the scary old bridge and the new, awesome archway.

The old bridge was imploded in 1985, just a few months before my sister was born. Since I found the old bridge kind of “scary”, I wasn’t sad to see it go, though as an adult I understand that it was quite a magnificent structure that was demolished. But the old bridge had to go, to make room for a second arch. The second bridge took a number of years to build, since a piece of it was accidentally dropped into the river. So all throughout my elementary school years, the JB Bridge was constantly under construction. By the time it was finished, my family was already making plans to move to Michigan. So in my head, the JB Bridge will always be a construction site.

To this day, I still have a soft spot in my heart for the JB Bridge. One of my favorite landmarks in Austin, Texas is the Pennybacker Bridge, which bears a striking resemblance to the JB Bridge. There’s something about that big iron-red arch that brings me back. While I haven’t lived in the St. Louis area in 25 years, the twin arches of the JB Bridge continue to haunt my dreams.

Do you have a favorite bridge? I’m sure most people don’t. But if you can think of a bridge that really stands out to you, let me know in the comment section.