The Ghosts of Microsoft Bob 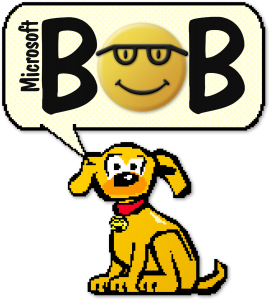 In the early 1990s, Microsoft tried making a computer interface that looked like a house. The program was called Microsoft Bob. It featured a yellow smiley face logo with Bill Gates glasses. All your apps were items scattered around the room, with a cartoon dog in the room to help you. It was one of the company’s biggest failures, and yet, its influence is still being felt today.

While Microsoft Bob is one of the company’s most notable failures, it’s far from the only one. Another Microsoft product that garnered a ton of hate was Microsoft Office Assistant. The idea was to have an intelligent interactive help system that could detect what kind of document you wanted to make and help you format it correctly. To make this help system, Microsoft started with the interactive cartoon characters from Microsoft Bob. Only instead of a talking dog, they went with a paper clip. The result was a cute-but-creepy cartoon character that terrorized office workers everywhere. Clippy was so reviled that Microsoft later made a YouTube video killing him off, to the hurrah of anyone who’s ever had to deal with him.

During development, graphic designer Vincent Connare noticed that the cartoon characters’ speech balloons used Times New Roman. There were few fonts available on Windows back then, and none of the existing typefaces were appropriate for speech balloons. So Connare made a new font that resembled the hand lettering used in comic books and comic strips. Unfortunately, his Comic Sans font didn’t make the deadline for Microsoft Bob 1.0. However, Microsoft added it to Windows in anticipation of future versions of Microsoft Bob. And while Bob 2.0 never came to fruition, Comic Sans remained. Soon it was taking up by office workers looking for a computerized equivalent of handwriting, and within a few years, it became the most hated font in the world.

So Clippy and Comic Sans were some of Microsoft’s greatest failures, but Microsoft Bob was also the root cause of Bill Gates’ greatest personal success. Through the development if Microsoft Bob, he met an employee named Melinda French. They soon fell in love and married in a private ceremony in Hawaii. 20 years later they have three kids and control of the world’s largest private foundation: the Bill and Melinda Gates Foundation.

With over $1.5 billion to give away each year, the Gates Foundation has dedicated itself to such things as eliminating malaria, fomenting international development, and supporting libraries and learning. And all of it is thanks to a cartoon dog named Rover and a half-baked user interface called Microsoft Bob. MS-DOS and Microsoft Windows may have made Bill Gates a billionaire, but Microsoft Bob brought him happiness and helped him use his billions for the betterment of humankind. In this regard, Microsoft Bob is the company’s greatest creation.

Clippy can still rot in Hell, though.