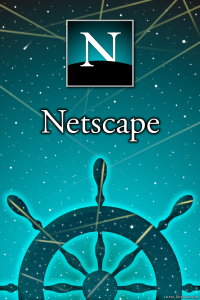 The World Wide Web really started to take off in the mid-1990s. If you wanted to use it, you needed a web browser. Early Internet users could make do with simple text-based terminal software, but the Web had a graphical interface from the outset. Several products competed for domination in the early days, but ultimately the First Browser War came down to two choices. Netscape Navigator or Microsoft Internet Explorer.

The very first web browser, designed by Tim Berners-Lee himself, was unsurprisingly called WorldWideWeb. It ran on NeXTSTEP, and couldn’t display images in a document, just in a pop-up window. However, WorldWideWeb was little more than a prototype. Soon other developers soon stepped into the fray. A Taiwanese engineer named Pei-Yuan Wei developed a browser called ViolaWWW. This could display images within a web page, and had rudimentary frames and scripting. But ViolaWWW was soon overshadowed by Mosaic, the granddaddy of all modern browsers.

Mosaic was developed at the University of Illinois’ National Center for Supercomputing Applications (NCSA). Compared to the other early browsers, Mosaic was easier to use, with better rendering of webpages, including in-line graphics. Most importantly, it had a team of talented engineers behind it. Mosaic wasn’t the first browser by any stretch of the imagination, but it was the first that got it right.

Mosaic was such a smash hit that its developers, led by Marc Andreessen, left NCSA and started their own company called Netscape. There they worked on created a new browser from scratch, being careful not to copy any code from Mosaic. The result was Netscape Navigator. Andreessen and his team hoped it would be a “Mosaic Killer“, a term they represented with a Godzilla-like mascot called “Mozilla”. This mascot was deemed too unprofessional, however, and was soon dropped, only to rise again years later.

Netscape’s browser included a bunch of technical improvements to the web surfing experience, like cookies and Javascript. Navigator was a commercial product that sold for around $30, although they Netscape had liberal policies on licensing it to universities and ISPs, so it was readily available to many people for free. Thanks to broad distribution and a host of technical innovations, Netscape Navigator quickly became the dominant standard.

Despite Netscape’s success, it didn’t kill Mosaic. In order to monetize their browser, NCSA spun off their commercial assets into a company called Spyglass. Spyglass competed with Netscape for a while, until the world’s most powerful software company came knocking at their door. Microsoft wanted to get in on the web browser market. So they licensed Mosaic from Spyglass and created a new browser called Internet Explorer (IE). Thus started the First Browser War.

In the mid-1990s, Netscape was the darling of Silicon Valley. Their IPO in 1995 was one of the biggest listings in history, and their choice to go public before making a profit set off the later dot-com bubble.  Still, they were in for a fight. Netscape’s business model was built on selling retail copies of Navigator. But Microsoft made the bulk of their money from selling Windows 95 and Microsoft Office. That meant they could afford to give Internet Explorer away for free. This, along with their reputation, helped them gain a foothold in the market. But the real coup was yet to come. Microsoft decided to bundle Internet Explorer with every copy of Windows 98. Not only bundled, but integrated into the operating system. With Windows 98, you actually had to go out of your way to use Netscape. Otherwise your computer used IE by default.

Netscape fired back by adding more features to their product. They integrated Navigator 4.0 into an application suite called Netscape Communicator. This included the browser as well as an email client, HTML editor, news aggregator, and other Internet utilities. It was popular enough, but as Netscape added more features, their code base grew unwieldy.

In early 1998, Netscape created a non-profit foundation to create an open-source code base. They named the foundation after their mascot, Mozilla. The Mozilla Foundation had potential, but Netscape as a commercial entity continued to suffer. Later that year they merged with AOL. This helped them to give their browser away for free as well, but with Windows 98 taking over the desktop, it was too little, too late. Within just a couple of years, even AOL switched to Internet Explorer. Netscape was dead for good.

Triumph of the Big Blue E

By bundling Internet Explorer with Windows as well as Mac OS, Microsoft completely took over the market. By 2002, Internet Explorer held over 95% of the market. Microsoft had won the First Browser War. And then they rested on their laurels. By the time Windows XP came out (bundled with Internet Explorer 6), Microsoft had stopped innovating. They considered IE to be just another part of the OS, like Solitaire. A couple of years of stagnation followed, but as the Web grew and changed, a new product would rise from Netscape’s ashes. The almost-forgotten Mozilla project would challenge IE once again, opening the way for the Second Browser War.