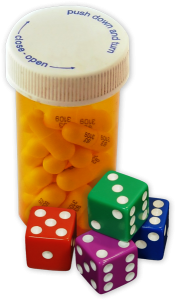 Are you familiar you Pascal’s Wager? French mathematician and philosopher Blaise Pascal said that even if you doubt the existence of God, you should be religious just in case He exists. Why? Because if you ‘re a good Christian and God doesn’t exist, you lose a few Sundays in this life before facing the eternal oblivion. But if you’re a sinner and God exists, you’ll spend an eternity in Hell. Given these scenarios, Pascal says it’s better to bet on God.

There are plenty of counterarguments to Pascal’s Wager. You could, for example, bet on the wrong god or the wrong religion. Or God could damn anyone who goes through the motions without really having faith. But as a general rule, Pascal’s Wager holds up. For someone with both faith and doubt, it’s a good way to keep yourself on your best behavior. It’s best to be good in this world, because you don’t know what’s in the next.

Even if your doubt outweighs your faith, Pascal’s Wager is not a bad idea. If you don’t believe in the afterlife, your goal should be to maximize happiness in this world. And if faith, even rationalized faith, can lead to happiness, I’m willing to try it.