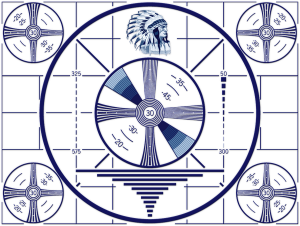 When it comes to watching movies at home, DVDs are on their way out, and Blu-Ray discs have yet to pick up the mantle. As more and more people stream their movies directly from the Internet, the very concept of a packaged movie is becoming quaint. And yet, it wasn’t that long ago that we were watching VHS and Betamax* tapes. But before VHS, there were other formats. When I was a kid, my family had an RCA Selectavision, a system that used vinyl records to replay video. Yes, vinyl.

The system was a little more advanced than an LP record, but it still involved a needle dragging across a plastic disk. RCA called it a Capacitance Electronic Disc, and it used a high-density groove system to store an analog television signal. There were no lasers or magnets involved. And no computers. It was a clever idea, though it had its drawbacks.

The disks themselves were very delicate, so the machine had a slot that let you insert the cardboard sleeve. Once you did, it would pull the disk from the sleeve and spit out the empty case. As a kid, I thought that part was pretty nifty. What I didn’t like so much was having to flip the disk halfway through the movie. The Selectavision disks only held an hour’s worth of video on each side, so you’d half to flip the disk at least once per movie. And with longer films, you might even need a second disk.

Ahead of Its Time

The RCA Selectavision is a classic example of an idea ahead of its time. First conceived in 1964, it would have been a real game changer if it had come out in the Nixon era. Instead, it took 17 years to develop, by which time it took a backseat to videotape and laserdiscs. The Selectavision was too advanced for the 1970s and too antiquated for the 1980s. It is the perfect example of a technology failure.

* On a side note, does anyone wonder if Betamax failed because it was named after the second letter of the Greek Alphabet? Wouldn’t Alphamax have been a better name? Even Omegamax would have been better, since as the last letter of the alphabet, it implies finality: the only video player you’d need to buy. Just a thought, anyway.