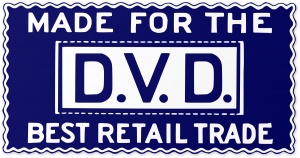 DVDs have been around for a decade and a half, but I still think of “underwear” when I hear the term.

DVDs aren’t as popular as they used to be, but despite competition from online video streams, we still watch a lot of movies on DVD and BluRay. We also watch a lot of DVD Special Features. Back in the glory days of DVDs (the mid-oughts), I remember standing in Best Buy comparing the list of features on the back of every package. Almost every disc had something to offer, even if it was just “Interactive Menus”. (Seriously, that is not a DVD Special Feature, any more than a steering wheel is an upgrade on a new car.) But aside from the bullshit terms like that, there was still plenty of stuff to see.

Deleted scenes are my favorite special feature. Sometimes you get a new perspective on the movie. A lot of times, there are perfectly good scenes that just didn’t make the cut. But other times, you can really see why they cut it. There are an awful lot of deleted scenes that are just plain boring. And their are others that, if included, would have ruined an otherwise awesome film.

I don’t care much for blooper reels. Sometimes you catch a funny ad lib, but if it were really good, it would have made it into the movie. For the most part, watching the blooper reel feels like looking at someone’s vacation photos. You can tell they had a lot of fun, but it’s not that much fun to watch. As people say when they tell a boring anecdote, “You had to be there.”

The audio commentary can be very good or very bad. It just depends on who’s commenting. I’ve seen a lot of actors who just talk about how good/bad their hair looks, but I’ve also heard some very good trivia about the making of the film. But since listening to the commentary requires watching the film in full, I have to be damn sure I want to devote a couple of hours to the commentary track. I usually don’t.

DVDs often include a short documentary about the making of the film. For old films, these featurettes can lend some interesting historical perspective, but with modern movies, they’re almost always terrible. The problem is that the “Making Of” film is planned from the offset. Movie and television studios make a lot of money off of DVDs and BluRays, so nowadays they film the documentary right alongside the movie. What you end up with is a series of “talking head” interviews with the cast and crew, where everyone talks about how great everyone else is. Why would they say anything else? After all, they’re still on set when these interviews take place. They’re not going to badmouth their colleagues or sabotage future sales. And even if they have the best of intentions, it’s hard to get perspective on something that’s still going on.

DVD special features are often hit-or-miss. Sometimes you see a really good deleted scene, while most of the time, you feel like you just wasted an hour. It’s impossible to tell until you check it out. So if you’re going to buy a DVD or BluRay disc, my advice is to buy it solely on the merits of the the movie. The DVD special features are just a bonus. You don’t pick restaurants by the sugar packets they have on the table, so don’t choose DVDs based on the special features.