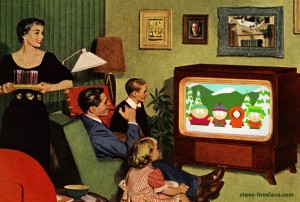 When it comes to currency, the more you print, the less it’s worth. This is a basic law of economics, and it doesn’t just apply to the money supply. If there are only three widgets in the world, each one is worth a lot. If there are thousands, the value of each widget drops. The same can be said for TV shows. As the number of TV shows has increased over the years, the value of each show has gone down. I call this “television inflation”, and its not just some abstract macroeconomic idea. It’s a rational explanation for why there’s so much crap on TV. Let’s take a look decade by decade.

In the 1970s, there were only three networks (four if you count PBS). There were a few independent stations here or there, but they mostly played reruns. VCRs had yet to catch on, so if you wanted to watch TV, this was it.

Cable TV became popular in the 1980s. and we soon had thirty or forty channels on TV. But the number of people working in the television industry did not increase tenfold. Instead we got a lot more reruns. And it wasn’t just Nick at Nite playing reruns of “I Love Lucy”. Even the channels with original content played on a loop. MTV played the same hits over and over. Headline News played the same half-hour news show over and over for six hours. And while early cable was dominated by reruns, they were good reruns. Because cable was so new, networks like Nick at Nite and TBS were able to pick the best shows to replay. Likewise, Headline News could make a well-researched, concise news program, since they were only making a few programs a day.

In the 1990s, the number of channels continued to grow. Flush with cash from 80s reruns, cable networks expanded their original programming. Here we start to see the first hints of television inflation. MTV was a pioneer in this regard, coming out with “The Real World”, widely regarded as the first reality shows. Another leader was Fox, the fourth broadcast network. Their un-narrated documentary series “Cops” set a tone that would blur the line between reality show and documentary. Finally, in the 1990s, the number of reruns continued to increase as well, as channels like TBS and TNT started running “marathons” of shows and movies on weekends and holidays.

The new millennium heralded the dawn of reality shows: contests like “Survivor”, talent shows like “American Idol” and game shows like “Who Wants to Be a Millionaire?” And thanks to digital cable, the number of stations exploded. Now there was an MTV 2, a History International and increasingly specialized networks like Animal Planet and Cartoon Network. CNN, once the only game in town for 24-hour news, had to compete against MSNBC and Fox News. This meant that CNN’s Headline News couldn’t play the same half hour over and over. They had to fill every minute of airtime with original content. This led to a rapid increase in talking heads and pundits. They filled the time between the news stories with analysis. Gone were the days when you could tune in for 15 minutes and catch the day’s headlines. With more analysis and punditry, the value each broadcast minute decreased, like dollars in a hyperinflation.

Today there are an uncountable number of TV channels. Even broadcast television, since the digital switchover, allows local TV stations to broadcast multiple feeds. And that doesn’t even count YouTube, Hulu, Netflix and pirating. With so many outlets, it’s hard to attract a big audience to anything. As the number of people making TV shows has increased, the number of people watching any one show has plummeted. This leads to scenarios such as the dumbing down of the History Channel. Well-researched documentaries cost a lot and attract a small audience of history nerds (like me). It’s cheaper to film a truck driver or a pawn shop owner doing day-to-day work, and edit it to make it more dramatic. Not only is this kind of show cheap to make, it attracts wider audiences than more high-brow programming.

The Future of Television

Like beer or music or any number of industries, television is turning into a Long Tail market. In the future, you’ll have even more shows with even smaller audiences. As this happens, we’ll see two kinds of shows: cheap mass-produced series that fill airtime with unscripted chatter, and niche shows made for fans by fans, paid for with donations and direct payments (Louis CK’s $5 standup video comes to mind.) As for big-budget scripted entertainment, you’re going to see an ever-blurring line between TV and film. The few scripted shows left will borrow more and more heavily from the Hollywood traditions.

Entertainment changes with time, but its comforting to remember that there’s something for everyone. If you don’t like reality shows, you don’t have to watch them. And if there’s truly nothing on TV that you want to watch, get out there and make something you can deem worthwhile. Thanks to the Long Tail Market and the Internet, you can make whatever you want. Somebody out there will watch it.