The Future of Stand-Up Comedy 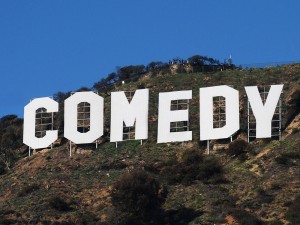 The Internet is killing stand-up comedy. Not comedy in general: just stand-up. Thanks to smart phone video cameras, YouTube and Twitter, it’s getting harder for comedians to hone their skills.

This is especially true with famous comedians. Chris Rock was complaining about this issue on the Daily Show the other day. When Jon Stewart asked him about his stand-up career, Rock started complaining about people filming his performances. As I learned from my own stint in stand-up, it takes a lot of time to perfect your act. You can’t just write some jokes down and say them into a mic; you have to get up in front of a live audience and see what flies.

Stand-up comedians are always refining their material, telling the same jokes in different ways till they get maximum laughs. This formula has worked for years. Even big-name comedians will pop into small clubs just to test out their jokes in front of a live audience. If the new jokes fall flat (as some of them will), the comedian can move on to something better. But all that changes when some jackass pulls out an iPhone.

Imagine you’re at a small town comedy club, when Jerry Seinfeld makes an unexpected appearance. You pull out your phone and start filming him, if for no other reason than to brag to your friends on Facebook. The thing is, Jerry’s trying out some new material that night. It’s a big departure from his normal observational comedy, and he doesn’t quite pull it off. Still, you have a good time and upload the video to YouTube. Then someone else copies the video and edits it down to the gaffes. Pretty soon, it goes viral. And once everyone’s heard the bad version, the bit is ruined.

Though the golden era of stand-up comedy may be coming to an end, I’m not in the least bit concerned. There will always be new and interesting ways to convey levity. Comedy itself isn’t going anywhere,even if stand-up is doomed.