The ABCs of Spelling Bees 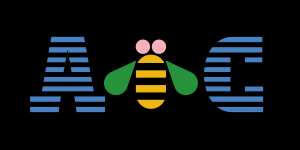 A spelling bee logo based on Paul Rand’s famous rebus for IBM.

I’ve always been good at spelling. I usually got all A’s in elementary school. But my orthographic skills never really translated over to spelling bees. Despite my nerdiness, I never really excelled at these types of academic contests.

Spelling bees are largely a phenomenon in English-speaking countries. In most other languages, spelling is straightforward. In Spanish, it’s largely phonetic, with a couple of exceptions (like the silent letter H.) A Spanish-language spelling bee wouldn’t be all that interesting, even with long and complex words. On the other end of the spectrum, Japanese requires a great deal of rote memorization, with two syllabaries (katakana and hiragana) and thousands of logographic characters (kanji). You could certainly make a competition out of Japanese orthography, but it would work better as a written, rather than an oral contest.

As an adult, I don’t really suffer much from stage fright. I’m a very extroverted person in general. I’ve done stand-up comedy, and if there’s karaoke, I’m the first to sign up with a Dr. Dre song. But back in elementary school, I wasn’t quite so gregarious. Any time we had a spelling bee, even just in my third grade classroom, I screwed up. Ask me to spell “go” and I would respond with “J”. I could clearly see the right letters in my head, but when put under pressure, my mouth would not cooperate. In the end, spelling bees require more than just spelling skills. They require you to be cool under pressure with a strong stage presence.

Spelling bees have become a big deal in recent years. Nowadays, you can turn on the TV and see the Scripps National Spelling Bee on TV. It’s like the Super Bowl for elementary school nerds. To tell you the truth, I find it a bit ridiculous. As the National Spelling Bee has grown in popularity, the competition has gotten tougher, as have the words. The winning word in 1981 was “sarcophagus”. A tough word to spell, but still a word most people are familiar with. In 2014, the winning word was “stichomythia”. I had to look that one up. It’s always fun to learn new vocabulary, but on a national level, spelling bees are more about memorizing odd vocabulary than actually learning to spell.

What’s your experience with spelling bees? Let me know in the comment section.