We generally think of creativity as something that should never be compromised. There’s a kernel of truth to this, as many good idea have been squashed and perverted by faceless bureaucrats. Likewise, trying to draft original ideas in a committee is a recipe for frustration and gridlock. And yet, creativity is sometimes improved by give and take. A little bit of compromise is good. Let’s take a look at some examples and see why. 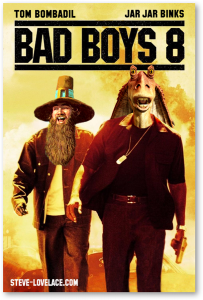 Even though George Lucas created the most popular sci-fi franchise of all time, his fans decry everything he does, so much so that even Lucas has realized that he’s done all he can with the series. That’s because, for the most part, the more control Lucas has had, the worse the resulting product was. The Empire Strikes Back is largely considered to be the best film in the series, and it was neither written nor directed by George Lucas. On the other hand, the awful prequel trilogy was mostly his doing. By the time he made The Phantom Menace, George Lucas was too powerful for his underlings to criticize him. And with advanced CGI systems, he became enamored with the way things looks, to the detriment of characters and plots. All of this is symbolized best by Jar Jar Binks, a character seemingly invented to cash in on children’s toys.

If George Lucas has been accused of being too commercial, J.R.R. Tolkien represents the opposite end of the spectrum. Tolkien wrote The Lord of the Rings and other Middle Earth sagas so that he would have a context for his elaborate invented languages. While Middle Earth is an awesome work of human creativity, Tolkien’s editors probably should have reigned him in just a little bit. Anyone who’s ever read The Fellowship of the Ring knows that the characters wander for a long time before starting their quest. Many of these wanderings never made it into the movies. For good reason. The Fellowship’s side adventures with Tom Bombadil do nothing to advance the story. In fact, they slow things down with details that don’t really matter in grand scheme of Middle Earth.

I think that creativity is a lot like alcohol. It’s good stuff, but it needs to be mixed and diluted. By itself, it’s too powerful, and when watered down too much (as in a bureaucracy), it’s too weak and bland. But when the pure creativity of a talented artist is mixed with just the right amount of compromise, you often end up with a masterpiece.

Can you think of any other examples of pleasantly-compromised masterpieces? Or perhaps great works of art where the creator got a little out of control? Let me know your thoughts in the comment section.