Note: This article was written just a couple of weeks before George Lucas sold the Star Wars Franchise to Disney. And while I doubt that Lucas read my article, I’m glad he came to a similar conclusion. 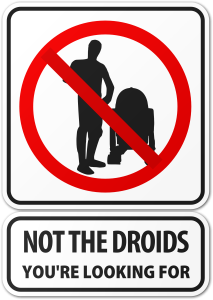 George Lucas needs a restraining order, a piece of paper forbidding him from messing with the Star Wars franchise.

It’s a well-known fact that Lucas was a student of Joseph Campbell. Campbell’s book, The Hero with a Thousand Faces, talks about the monomyth, the story behind all stories. Every great story throughout history has the same underlying themes and archetypes. What Lucas did was overtly manipulate these psychological concepts. This was the key to the movies’ success. Star Wars appeals to our deep-seated need for mythology, just like the epic poetry of Ancient Greece and the tragedies of William Shakespeare.

By basing his story on the monomyth, George Lucas created the most successful movie franchise in history. But in doing so, he was playing with fire. The monomyth is not just something that Joseph Campbell made up. Rather, it is a deep-seated force of Jungian psychology. George Lucas set out to create modern mythology, and succeeded beyond his wildest dreams. The problem is, once Star Wars entered our collective unconscious, George Lucas lost control of his own creation.

Legally George Lucas owns all the rights to the Star Wars franchise. This is an undisputed fact. And under current copyright laws, he and his estate will own the rights for a very long time. But in this case the law runs counter to basic human nature. As part of our modern mythology, Star Wars belongs to us all. That’s why people get so upset when Lucas tries to change his stories. Millions of people grew up knowing that Han Solo shot Greedo first, and no one can convince then otherwise, not even the guy who made the story up in the first place.

Star Wars provides artists and writers with a bit of a cautionary tale. Be careful with the monomyth. You may end up creating a story greater than you can control. Then again, the movies have made so much money over the years that Lucas’ artistic integrity doesn’t really matter. George Lucas may have lost the respect of his fans, but he’s laughing all the way to the bank.