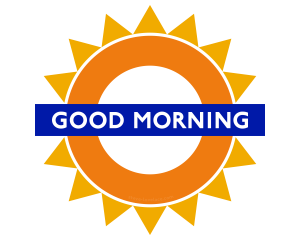 This sunburst design is based on the London Underground logo.

When I first started this blog, I committed to doing three posts a week. They weren’t necessarily good posts by my current standards, but I was doing it. In the last few years I’ve struggled with writing at all. I just couldn’t figure it out. But after much thought, I realized the problem. I was writing at the wrong time of day. Since then, I’ve taken up early morning writing.

For the first couple of years I lived in Dallas, I didn’t have a car. Dallas is not the friendliest city for those without a car, but somehow I managed. I took two buses and two trains every morning, and again every evening. My commute often took well over an hour, even as much as an hour and a half, so I had plenty of time to kill. This was before I had an iPhone, so I took to carrying a pen and paper. Every day I would write and listen to my iPod. It was a good way to pass the time, and once or twice I almost missed my stop by getting carried away with my morning writing.

I did most of my writing on the morning train. In the evenings after work, I was more likely to crank up the music and stare out the window. My brain was fried. Later, when I got home, I would get a second wind. I would type up my notes, often with a lot guessing as to what I had scrawled that morning. Then I would get up the next day and do it all over again.

All of this changed when I got a car. It was a pivotal moment in my life, making my existence in this car-dependent city much easier. Overnight, my commute was cut down from an hour and a half to just half an hour. With an extra two hours of free time every day, I looked forward to plenty of time to work on my blog, without the noises and smells of public transportation. But of course, that didn’t last. It was too tempting to sleep in.

Within a week or two of getting my car, that morning writing routine was gone. The evening routine hung on a little longer. If the weather was nice I would sometimes find a nice coffee shop patio after work. But most days I was too tired. Working an office job, as opposed to a retail or service job, it was my mind that was tired more than my body. So I would sit at my computer and stare at a blank word processor. Then I’d get distracted by the internet and social media and that was it.

Amazingly, it took me an additional six years to realize the problem. In fact, I only figured it out about a few months ago, through a journaling process I call “emotional writing.” My brain was too tired after work to write. That wasn’t as intuitive as it sounds. Back in the day, I did a lot of writing in the evenings. Or so I thought. Upon reflection, I realized that I did a lot of editing in the evening. Both processes deal with words on a page, but the part of my brain used was different. So I had the thought, mornings are for drafts. Evenings are for edits.

So to use a bit of alliteration: Morning Musing. Evening Edits. I think it’s important to listen to your brain and figure out what times work best for various tasks. Now I’m not one of those writers who’s like, “you should get up and do your writing early.” Instead I think you should experiment and find out what works best for you. I’ve found that mornings work best for me, at least when it comes to stream of conscious writing and (very) rough drafts. I view the morning as the time to mine the materials that I’ll use to edit throughout the rest of the day. Again your mileage may vary, so figure out what works best for you.

The Importance of Distractions

I do most of my morning writing at the coffee shop. I’ve tried writing at home, but it just doesn’t cut it. I need the hustle and bustle of a public place to stimulate my brain. When I’m doing a rough draft, I like to stare off into the distance and touch type. There’s something about a quiet, still room that forces my eyes to stay on the screen and keyboard. Then I get caught up on the words themselves, which distracts me from the actual narrative. So ultimately, I like to write with distractions because the distractions help keep my focus away from the mundane process of pounding my fingers against a bunch of plastic keys, so that I can focus on the writing process as a whole.

This also explains why I was so productive on the morning bus. Public transit is chock full of distractions, some pleasant and some not. With my attention drawn to my environment, my thoughts could wander and the ideas could flow. So as much as I hate spending money for coffee that I could just as easily make at home, for now, I’m going to keep getting up early, going to the coffee shop and getting some writing done.

Have you found that your creative mind works differently at different times of day? What routine works best for you? Let me know in the comment section.