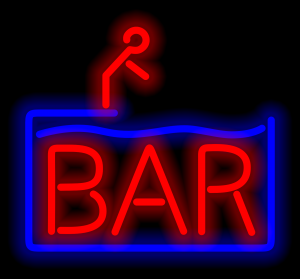 “Can I get a Franziskaner?”

“I don’t think this is a Hefeweizen kind of bar,” I said to Jerry.

“Okay, then. What kinds of beer to you have?”

Jerry sighed. “Make it Shiner, then.”

As she walked away, Jerry said, “I thought Franziskaner was pretty common.”

“That’s because we usually go to more upscale places. This is a dive bar.”

The waitress came back a minute later with two glasses of dark Shiner Bock. Jerry took a sip and made a face.

“It’s not that bad. At least they didn’t bring us Lone Star.”

I took a gulp of my beer and damn near spit it out in Jerry’s face. I forced it down and said “What the hell is wrong with this?”

“It’s not normally this shitty. Something’s off.”

I called the waitress over and told her that the Shiner was off. She took our glasses away and brought us Bud Light instead. While not as skunky as the Shiner Bock, it still tasted funny.

“This is godawful,” said Jerry. “I don’t know how people can drink this stuff.”

“I’m telling ya, Jerry, it’s not normally this bad. I agree that I’d rather have a Franziskaner, but I drink domestics too, and they’re usually pretty palatable. No, this weird taste has nothing to do with the choice of beer. This place doesn’t do a very good job of cleaning out its taps.”

“Do you want to go somewhere else, then?”

“Nah. There’s nowhere else in walking distance, and I don’t feel like driving across town just to go somewhere else.”

Jerry and I tried to drink our Bud Lights, but after another ten minutes, neither of us had gotten very far.

“This really is pretty terrible,” I said.

We called the waitress over and got the check. She didn’t charge us for the Shiner. I put it in my card with a generous tip.

“It’s not her fault that the beer here is so awful.”

“Actually, it kind of is. It’s not her fault that they don’t serve Franziskaner, but it is her job to make sure that the taps are clean and the beer doesn’t taste like ass.”

“Well, Jerry, it’s too late for that now. I already paid. Besides, it’s a dive bar. It doesn’t cost that much anyway.”

“This isn’t a dive; it’s a dump. Dives have charm, dumps are just a place to get drunk.”

“In that case, let’s find a dive bar, Jerry. Come on, the night is still young.”

What separates a dive bar from a complete dump? I’ve been to both, and it’s certainly a fine line. What are your experiences with such establishments? Let me know in the comment section.