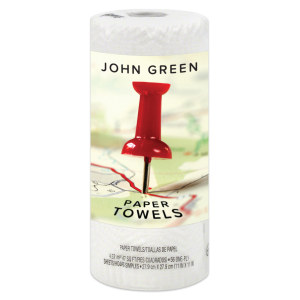 Above: A punny reference to John Green’s novel “Paper Towns”.

I don’t like hand dryers in public restrooms. They’re loud; they’re slow; and they make me feel like my just-cleaned hands are dirty all over again. Supposedly hand dryers are better for the environment, since you’re not wasting paper towels, but then again, you’re still using electricity. In the end, I think they’re more for making less work for employees to order and stock towels, rather than to save the environment. If the latter were the case, you’d see Prius-driving environmental types installing hand dryers in their private bathrooms. I’m sure someone somewhere has, but I’ve never seen it.

With that in mind, let’s look at some of the options for hand drying in public restrooms:

Paper towels are my favorite option for the restroom. They dry your hands quickly and quietly, and they’re good for opening the restroom door without touching the filthy handle. That said, there’s a lot of variation in paper towels. Some of the more snazzy places I’ve visited have big, thick towels that almost feel like cloth. I feel a little guilty throwing these away, to be honest. Then there are the crappy brown paper towels that feel like kraft paper, and are just as absorbent. These remind me of the kind of paper towels we had in high school, and not in a good way. Still, I’ll take a crappy paper towel over a fancy hand dryer any day.

I have several issues with hand dryers. First off, they take longer than paper towels. You have to stand there for a good twenty to thirty seconds to get your hands dry. And even then, there’s usually a little residual moisture. All the while, you have to listen to this loud motor echoing off the porcelain and tile. And for all you germaphobes, it’s not too reassuring to know that it’s stinky bathroom air blowing over your hands. It’s not that big of a deal, but it still feels a little gross.

And then there are those Dyson dryers that are supposed to be more efficient and effective. Those involve sticking your hands in this narrow slot, trying desperately not to touch the sides. For bigger people like me, that’s damn near impossible. In any case, studies show they’re even less hygienic than regular hand dryers. Dyson dryers are the worst.

At home, I use terry cloth hand towels. These can get dirty pretty quickly, but if it’s just me, I don’t mind. Sharing these kinds of towels is nasty, though, so whenever I have a party, I put out paper towels for my guests.

You don’t see cloth towels in public much any more. When I was a kid, there were those linen towel dispensers with a big, long roll of towels that came out and went back in to the dispenser. These freaked me out as a kid, since I thought it was the same nasty piece of linen looping around the machine. In fact, it’s a roll of linen that can be washed and reused. I’m guessing these aren’t very cost-effective, since they seem to be a rare breed in the modern restroom.

How do you dry your hands? Do you prefer hand dryers, and if so, why? Let me know in the comment section.