The Beauty of Barcelona’s Eixample 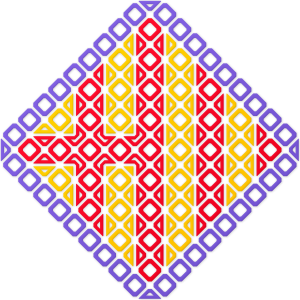 Barcelona is a beautiful city at any scale. Take a walk down La Rambla or visit the Sagrada Familia and you’ll see some of the greatest urban spaces in the world. Then take a look at the details, such as the elaborate mosaics of Park Güell or the hexagonal pavers on the Passeig de Gràcia. Then, once you’ve taken in the details, take a look at the big picture. Look at Barcelona from above, and you’ll see the most distinctive city grid in the world: miles and miles of octagonal blocks, laid out like the rounded icons of an iPhone. This is the Eixample (pronounced “uh-shamp-luh” in Catalan), and it’s the core of modern Barcelona.

Barcelona is a very old city, founded by and named for the father of Hannibal, Carthaginian General Hamilcal Barca. After Rome’s conquest of Carthage, the settlement became a Roman outpost known as Barcino. Over the centuries, the city was conquered in turn by the Visigoths, Moors and Franks. Eventually the fortress became a city, and the city outgrew its medieval walls. There was soon a rush to tear down the walls expand the metropolis. This expansion, or eixample as it’s called in Catalan, was an big undertaking that needed a big dreamer. 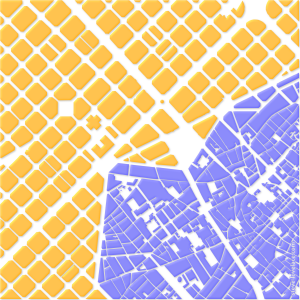 Looking at the city grid around the Plaça de Catalunya, you can clearly see the difference between the original Gothic Quarter (in blue) and the 19th Century Eixample (in orange).

Ildefons Cerdà was the civil engineer in charge of the city’s expansion. With urban planning in its infancy, he was left to his own devices. What he came up with was amazing. Cerdà started with a grid, much like the newfound cities of America. He laid out row after row of perfectly square blocks, and then he cut corners. He chamfered the corners of each block to make open, octagonal intersections. This kept the city brightly lit and well-ventilated. It also helped traffic flow throughout the city. Cerdà also zoned for courtyards within each block, allowing people living in the dense city to have their own little garden retreats. To this day, there are countless little gardens throughout Barcelona, well away from the prying eyes of the ever-present tourists.

Urban planning isn’t like graphic design, or even architecture. Unless you’re playing SimCity, you have to learn to compromise. Cerdà’s original plan had two big boulevards running diagonal to the rest of the grid, but they only ever built one of them. And then there were the concessions to reality. For example, there was an existing road connecting the old walled city to the nearby town of Gràcia. This didn’t line up with the grid, but Cerda made it work. And while developers ignored Cerdà’s proposed height restriction of four stories, the wide boulevards of the Eixample kept the taller buildings from overshadowing the street.

Modern American developers love cul-de-sacs and curved roads. And while there are plenty of urban planners who love geometrical urban grids, they usually lose out to cookie-cutter designs. America could learn a lot of Barcelona. Given how beautiful the landscape there is, it’s amazing that the Eixample hasn’t been copied by every city in the world.

What’s your favorite city in terms of urban planning and layout? Let me know in the comments.