From SimCity to Cities: Skylines 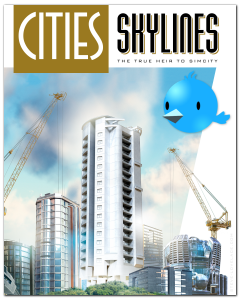 I’ve never been a hardcore gamer. While I love the aesthetic of 8-bit pixel graphics, I don’t spend a lot of time playing games. While I grew up playing Super Mario Bros. and rudimentary MS-DOS games, I never got into first person shooters like Doom or Duke Nukem. And somehow I never really took to resource-hungry modern games like Crysis, Skyrim or Overwatch. But there’s one game genre that’s had me hooked since the 1990s: city simulators such as SimCity and its modern clone/successor, Cities: Skylines.

SimCity got its start in the late 1980s. While developing another game, creator Will Wright realized he was having more fun editing game maps than actually playing the game. The story of how he got started is an interesting one, and Lazy Game Reviews has a more detailed history. Suffice to say that the first version of the game featured a top-down perspective, where you would plop down whole city blocks of residential, commercial, or industrial zoning. Truth be told, I never got into this version. SimCity 2000 was so much better in just about every way.

I can’t remember the first time I played SimCity 2000, but I was hooked almost instantly. Unlike the first version, it had a faux-3D isometric view, making the city feel like a real place that could exist. Instead of zoning whole blocks like in SimCity Classic, you could zone individual tiles. Want to put a single house between two factories? You could do it, even if it wasn’t a good idea. You could also upgrade your city as time went on, going from coal to nuclear power to cold fusion. Finally, the soundtrack was top notch, and is tied only with Super Mario Bros. for my favorite game music.

I played the next two versions of the game when the came out. SimCity 3000 was essentially the same game, but with refinements in the game model. It was fun to play, though I still preferred the music and graphics from the previous game. SimCity 4 was even more advanced, allowing you to collaborate with neighboring towns. Like the previous versions, it also had that isometric view, though the graphics made it look less pixelated and more realistic. It also ran really slowly on my parent’s IBM Aptiva. But overall it was fun, and I had no real complaints.

I was looking forward to SimCity 5, but it never really came. Instead we got SimCity Societies. It was a SimCity game in name only, completely eschewing the Residential, Commercial and Industrial zoning model used in every game since the original. I heard it was bad, so I skipped it. A couple years later, they game out with a proper SimCity sequel. It was a reboot confusingly called just SimCity, though players started calling it SimCity 2013 to differentiate it from the others in the series. Unfortunately, this game was no good either. Even though it combined the gameplay of the original isometric games with modern 3D rendering, it also required an always online connection for the sake of copy protection. Plus the cities were very limited in size. After reading reviews, I decided to skip it, pretty much giving up the franchise entirely.

Meanwhile in Finland, a small game studio called Colossal Order was toying with making their own city simulator. They initially nixed the idea, but after SimCity 2013 failed, they decided to give it a go. The result was Cities: Skylines, a game that worked pretty much like the old games, but with a modern, 3D rendered interface. Unlike the official SimCity, it didn’t require you to be online, and the cities weren’t so limited in size, either. It did have its downsides, such as a lack of disasters or on-the-fly terrain editing. But most of the initial problems have been fixed by either free patches or premium expansion packs. Plus, Cities: Skylines has embraced the “modding” community, allowing you to download all kinds of fan-made content and customize the game to your heart’s extent. It’s a game designed to be fun first and profitable second.

As someone who doesn’t play a lot of games, city simulators really appeal to me. In a way, they aren’t really games at all, but freeform creative outlets. SimCity publisher Maxis used to brand its Sim games as “software toys”, and I think the name is apt. These simulators fill a gap between video games and productivity software. Not quite play, but certainly not work. Thanks to Cities: Skylines, I hope to see a renaissance of such simulation games in the future.

Have you ever played SimCity or any other city simulators? Let me know in the comment section.