Playing GORILLA.BAS With My Family 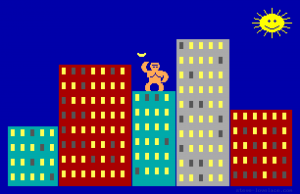 One of my favorite old video games was GORILLA.BAS. It was actually a demo that came with MS-DOS. I spent a lot of time knocking around in QBasic, and while I never became an astute programmer, I did develop a fondness for one of the included BASIC programs: GORILLA.BAS.

Later versions of MS-DOS came with the QBasic programming environment. This in turn came with several sample programs, which were roughly the DOS equivalents of Minesweeper and Solitaire.

Gorillas was a simple two-person artillery game. It involved two King Kong-like gorillas on top of skyscrapers throwing bananas at each other. The controls were simple. When it was your turn, you entered numbers for angle and velocity. Then you watched as your gorilla threw a banana. When he did, one of three things would happen:

I remember GORILLA.BAS better than many of the commercial games I played back then. I think that’s because Gorillas was a social experience. As a simple BASIC program, it contained zero AI. You could play the part of both gorillas, of course, but that wasn’t much fun. The fun part was watching the victory dance when you beat your little sister. Or laughing at the funny names your dad would make up for the gorillas. Because of these memories, I’ll always have a soft spot in my gear for GORILLA.BAS.

Did you ever play Gorillas or any similar artillery games? Let me know your experience in the comment section