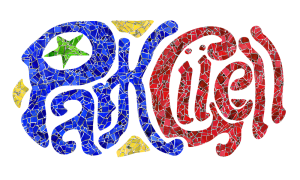 Jamie and I got off the subway and walked back above ground. I was expecting a large expanse of grass, but instead I saw a dense urban streetscape.

“I thought you said we were going to a park,” she said.

“Well, where is it? This looks like just another street.”

“I don’t know, but I’m sure it’s right around the corner. Come on.”

We walked a few blocks up the street, but still there was no park around any corner.

“I think we got off at the wrong stop,” said Jamie.

“No we didn’t. Take a look at this sign over here. We’re headed in the right direction.”

“Half a mile! What kind of morons put the park half a mile away from the subway stop?”

“Calm down, Jamie,” I said. “That’s not that big of a deal. We’ve been living in Spain for two whole months now. We probably walk three or four miles a day as it is.”

“You’re right. I was starting to sound like you there for a minute.”

Feeling slightly ashamed, I kept quiet as the Park Güell signs led us on to a side street. We were in for a shock as we turned the corner.

“I’ve never seen escalators on an outdoor street before.”

“I’ve never seen escalators that only go up,” I said. “I wonder why they don’t have any ‘down’ escalators?”

“Probably because you have gravity to help you getting down.”

Even with the escalators, getting up the hill was still a challenge. There were still several sets of stairs to climb, and my unfortunate habit of not being able to stand still on an escalator was defeating the purpose of the moving staircases. However, eventually we made it to the quaintly marked gate of Park Güell, where yet another staircase awaited us.

At the top of the last staircase, we made it into the park. For a moment, we stood atop the grassy hill, staring through a broken down chain link fence that separated us from an amazing view of the entire city.

“Hey, what’s that big building over there?” Jamie asked.

“That’s the Sagrada Familia. They’ve been building it for 125 years already.”

“No, the newer building. The skyscraper.”

“I wonder if they know it looks like a big, fat – you know…”

“I’m pretty sure they know. They probably don’t mind. This is Europe, after all.”

Have you ever been to Park Güell in Barcelona? If so what, what did you think of it? Discuss your thoughts in the comment section.