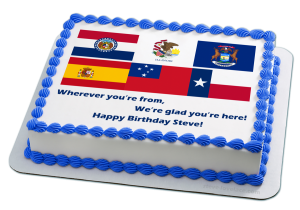 My friends got me this awesome cake, showing my love of flags and my confusion about where my hometown is. I suppose being 35 years old isn’t all that bad.

Another birthday has come and gone, and I find myself 35 years old. It’s s significant number in more ways than one. First off, it’s a multiple of 5. Since we use a base 10 system instead of a binary or base 12 system, 5 is a good number for major milestones. Moreover, it’s the number of fingers on a hand, so it’s an intuitively easy number to count by. But the number 35 is significant in other ways as well. It’s a multiple of 7. The ancient Romans believed we were reborn every seven years. And there’s some truth to that, since most of the cells in our bodies are replaced in that period of time. So in many ways, I’m a different person than I was at 28.

On a less optimistic note, 35 is half of 70, making it roughly halfway the average human lifespan. And while 35 is not exactly considered middle aged, it is the upper end of the so-called “youth demographic”. Turning 35 years old doesn’t make you old, but it does remind you that you’re no longer young, and that’s a little bit scary. I always like to remind myself that growing old is better than the alternative, but like death itself, aging is always a going to be a bitter flipside to the joys of life in general.

In any case, I can’t control that I’m getting older; I can only control my attitude to it. And when it comes to having another birthday, I get just as excited as when I was a kid. If I can’t stop it, I’d just as soon enjoy it.