The Great Videos of “The Great War” 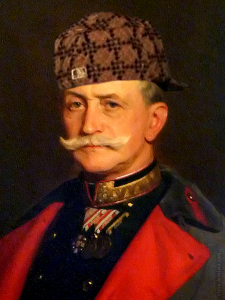 Conrad von Hötzendorf was the Austrian general behind the start of the war. Watching the series, I have to say he sounds like a real douchebag.

There was a time in the early 2000s where history documentaries were few and far between. The History Channel, once a haven for history buffs, moved to showing reality shows. For a while, there was no good alternative, but nowadays we have YouTube. Recently I discovered a new YouTube channel to binge watch. It’s called “The Great War”, and it will tell you everything you ever wanted to know about World War I, and then some.

World War I in “Real Time”

“The Great War” has an interesting gimmick. It covers the First World War in “real time”, a hundred years later. So if you tune in on say, March 16, 2017, you can hear the news of Tsar Nicholas II abdicating the throne of Russia on March 15, 1917. It’s almost like watching the news. And just like watching the news, it can be a sobering experience. When you learn about wars in history class, you memorize a few battles and offensives, viewing the experience as a giant chess game. But on a week-to-week basis, you see the futility in all its bloody horror. It really helps you see World War I for what it was: a global tragedy, and not just an elaborate game.

There is a downside to watching World War I play out week by week. Watching the events unfold in real time, you lose perspective of the big picture. Thankfully, “The Great War” has you covered. In addition to the weekly videos, they make topic-based videos: in depth looks about specific battles, countries and people. So if you want to learn more about what J.R.R. Tolkien did in the war, you can find out. They also do a series of Q&A videos. Called “Out of the Trenches”, these videos are much more casual, with the host, Indy Neidell, cracking jokes and being silly. But despite the silliness, “The Great War” never strays from its intellectual roots. There is thankfully no hint of the reality show components you find on cable TV.

Bringing Light to a Forgotten War

It would be disingenuous to say that World War I was forgotten, but it’s often overshadowed by World War II. Even back in the glory days of the History Channel, World War II so dominated the discussion that we often called it “The Hitler Channel”. So it’s really good to see the first conflict get better coverage. In many ways, World War II was the culmination of World War I. To study the Second World War while eschewing the first is a great sin. I’m glad to see “The Great War” bring light to this pivotal moment in history, so that we can avoid ever reliving such horror.