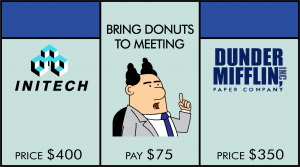 Are you working. Or are you playing office?

There are an awful lot of office workers out there who “play office”, like a little kid imitating her parents. This is a subtle and pernicious form of what Steven Pressfield calls “resistance”. What makes it so terrible is that, unlike checking Facebook or chatting with coworkers, it feels like real work, even for the people who are doing it.

So what is playing office? It means going through the motions instead of getting things done. It’s focusing on the policies and procedures instead of means and ends. It’s talking rather than doing. If you’re making copies in triplicate, you’re probably playing office.

Don’t get me wrong, bureaucracy exists for a reason. You’re never going to get away from meetings and documentation. But if you can, get away from those who make such things the sole focus of their careers. At the end of the day, only real work matters. Playing office is just a way to waste time, and not a very fun one at that.

Have you ever worked with anyone who likes to play office? Or maybe you’re guilty of it yourself. Let me know your stories in the comment section.