A Spartan in Texas 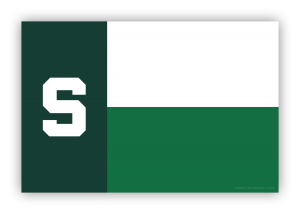 When you’re in college, you’re surrounded by people wearing your school colors, and living on campus makes you feel like you’re at the center of the world. This was true for me at least, going to a Big Ten university with more than 40,000 other students. Without even trying, I learned the Michigan State University Fight Song before class even started. Everyone was singing it in the halls and on the streets. My Spartan Pride reigned supreme. But as an adult on the other side of the country, I’ve learned something humbling: no one really cares where I went to college.

At my work last week, we were encouraged to decorate our office doors with our favorite sports teams, as a sort of team-building exercise. I cut out a green letter S and taped it up. Hardly anyone knew what it meant. Those that did were mostly Midwesterners like me.  I explained, both on Facebook and in person, that the S stood for Michigan State. People wanted to know why we used an S and not an M. I explained that because the University of Michigan uses an M, we use an S for “State”, or possibly Spartan.

To tell you the truth, I’m just happy when someone knows that I’m a Spartan and not a Wolverine. Down here, no one knows the difference between Michigan State University and the University of Michigan. And no one really cares. People are polite, of course, but the distinction is mostly irrelevant. It really helps me to keep humble. I can still be proud of my school, without thinking it’s the center of the universe.