The Picture Frame: Story of a Fiasco 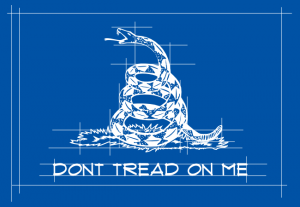 Sometimes a simple project can turn into a complete fiasco. The project? To frame a flag. My dad had acquired a yellow “Don’t Tread on Me” flag, which he wanted to put in the conference room of his law office. It was a standard 3×5′ flag, and there were no frames big enough to hold it. So we decided to make our own.

The first part of the project was easy enough. We went down to the home center and picked out some nice oak two-by-fours. Since we didn’t have any woodworking tools, we got them to cut it right there at the store. With four pieces of cut wood, a couple of L-brackets and some wood stain, we had a basic frame, four foot by six foot. Then we assembled a plywood backing, some green felt, and the flag itself. Voilà!

Or not. The frame was almost done, but it needed a certain something else. More specifically, it needed some glass. We decided to go with Plexiglas, since it was lighter and cheaper. Back to the store. Just as with the two-by-fours and the plywood, we asked them to cut it for us. They couldn’t cut Plexiglas at the store, but no worries. The clerk told us that all we needed was a box cutter and a yardstick. All we had to do was score a straight line through the Plexiglas, then break off the excess. Easy-peasy. We bought the Plexiglas and took it out to the car.

Driving Back to the Office

Notice I said “car”, not SUV, pickup or van. My dad drove a Saturn sedan barely big enough to fit our family. Even with the backseat pulled down, the Plexiglas had a good two feet hanging out. And because it was so big and flat, it acted like a sail. Driving halfway across the parking lot, it was obvious that it would either snap or fly away before we got back to the office.

“You’re going to have to hold it down,” said my dad.

I climbed into the backseat and lay alongside/on top of the sheet, with my legs in the backseat and my head in the truck. Once we were secure, my dad pulled out onto Saginaw Highway. His office was just down the street, but it was a five-lane highway the whole way. As he accelerated to 55 mph, the sheet started to wobble and flap. The power of the wind was strong, like the sailing ships of old. I started to wonder if the Plexiglas would fly out the back of the truck, taking me with it. Sure there were bungee cords holding the trunk shut, but the sheer energy in the Plexiglas would be no match for some glorified rubber bands.

The trip took all of four minutes, but it felt more like forty. Still, I made it back to the office in one piece, as did the Plexiglas. We pulled it out of the trunk and eased it up the narrow stairs of the former Victorian mansion. Upstairs in the conference room, we laid the Plexiglas out on the carpet and started taking measurements. We measured twice and cut carefully. Then, once we had a good score all the way down the panel, we bent it carefully and…

It cracked right down the middle, a big spidery crack working on its way all through the Plexiglas. Except for the scored part, the one spot we wanted to crack. There was a lot of yelling and cursing as we assessed the damage. The panel was totaled. It broke so unevenly there was nothing left of it to salvage. It was garbage.

The next day, my dad called a glass company and ordered a sheet of glass to our exact dimensions. A week later, two glaziers came out with a new glass panel. We were back in business.

Going with the glass, we had to make some modifications. We had planned to screw the Plexiglas directly to the back of the wood frame. Instead we had to add some extra hardware to mount the glass on to the back. Still it was a problem we could solve. After a couple more trips to the hardware store, we put everything together successfully. The only thing left to do was to mount it to the wall.

The picture frame weighed a ton. It must’ve been at least 50 or 60 pounds, if not 70. It was clear that the wire we mounted on the back wasn’t going to be enough. After another quick trip down to the store, we came back with a chain instead. My dad put not one but two anchors into the wall. Then my dad and I picked up the frame, while my dad’s secretary made sure the chain was securely fastened to the anchors. Once she gave the okay, we eased it down and backed away.

It held. It held and it looked great. After all the hard work, it had finally come together. It was a good feeling, and we went out to eat afterward, celebrating our accomplishment.

Monday morning, I got a call from my dad. “It’s ruined,” he said. I drove out to Grand Ledge to see the damage. The frame had managed to pull out both of its anchors, as well as a good chunk of plaster. Then, since it wasn’t a magical hovering frame, it had fallen to the floor, shattering the glass and cracking the frame askew.

“Maybe it would hold if we bolted it to a stud,” said my dad.

“Either that, or it would tear the whole wall down and cause the roof to collapse.”

“At this point, it wouldn’t surprise me.”

My dad had to go to court that morning, and since I didn’t have to go to class till late in the afternoon, I stayed behind and cleaned the mess up. The frame wouldn’t fit in my trunk, so I hauled up to the attic. There it sat for several years, slowly dissipating the stench of failure. Eventually, when my dad moved to another office, we had an auction and sold it off with a bunch of other stuff. I didn’t pay attention to who bought it, and I didn’t really care. When a good idea turns bad, sometimes the best thing to do is to wash your hands of it.