Penmanship and the Palmer Method 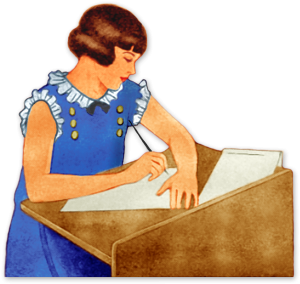 The Palmer Method still strikes fear in my heart. No other curriculum ever did so much to stifle my interest in a topic I found fascinating. I spent a good chunk of the third grade cursing golfer Arnold Palmer, never realizing at that tender young age that he had nothing to do with my low grades in penmanship.

In the late 1800s, Austin Palmer created a curriculum for students to learn copperplate cursive, which at the time was the preferred method of writing. It was a great simplification over the highly decorative Spenserian cursive, but Palmer was going for more than just a simplification of existing cursive scripts. He invented a rigorous method of instruction, designed to instill disciple and erase all traces of individuality and creativity.

To do this, Palmer made all of his students use their right hands, moving the pen with the whole arm instead of just the wrist. Then students were to make hundreds if not thousands of tedious loops and “push-pulls”, moving the pen up and down until self-discipline kicked in and all signs of delinquency disappeared. Or something like that. Austin Palmer claimed that his method was good for more then just learning to write legibly. He sold the Palmer Method as a sort of calligraphic boot camp, instilling discipline through penmanship. I don’t know if he was naïve or insincere, but such an idea seems ludicrous today.

The Palmer Method we learned at my school had been modified a bit since Palmer’s days. We learned block lettering first, only moving onto cursive in the third grade. Learning to print first would have thrown Palmer into an apoplectic fit. And quite frankly, the switch from one system to another didn’t make anyone in my class very happy either. On the other hand, by the time I went to in school, they no longer forced lefties to use their right hands, though they still didn’t like righties who wrote like lefties. (To this day, I still hold the pen outward like a lefty, instead inward like a righty.)

Thanks to the rigidity of the Palmer Method, I switched back to print in the fourth grade. After that, I only used cursive for my signature. By the time I got to college, even my signature was printed. To this day, people remark on my signature, telling me it looks like it was written by a second grader. I suppose my writing hand never graduated to the third grade.