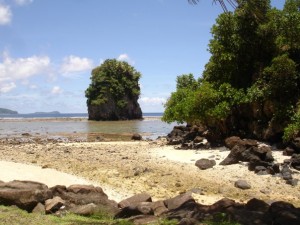 Fatumafuti: A rock outcropping on Tutuila. I don’t have any pictures of Palagi Beach, for obvious reasons.

The sun was beating down on me as I rode in the bed of a pickup truck. The air was as hot and muggy as usual. I was wishing I had brought a lava-lava to put over my head, like all the Samoan kids did on days like this.

“Why do they call it Palagi Beach anyway?” I asked “Dan”, who was sitting across from me. He looked perfectly comfortable in the tropical sun. I wondered how he ever survived in Minneapolis.

“They call it Palagi Beach because only palagis like you and me are dumb enough to go there.”

“So the native Samoans don’t go there?”

“I’m sure that’s an exaggeration.”

I could only hope so, since I wasn’t so sure about the whole thing. I was a long way from East Lansing, Michigan.

We went along the two-lane road for a while, slowing down as the pavement got worse. Every once in a while, “Charlie”, the driver, would stop to let someone cross the street even though there was no one behind us for half a mile.

After a while, we pulled off onto a grassy shoulder. “We’re here,” said Dan.

I looked around. All I saw was jungle and a tin-roofed fale in the distance. I knew the beach couldn’t be far away, but only because on the island of Tutuila, you’re never more than a mile or two from the sea.

We gathered up our stuff and headed into the bush. The trail was so narrow that it was hardly even there. but with Charlie and his girlfriend “Nikki” leading the way, all I had to do was follow.

We broke through the tree canopy within two or three minutes. The view of the ocean was as gorgeous as ever. The waters of the South Pacific are a shade of blue I’ve never seen anywhere else.

I stopped for a moment to enjoy the view. Only after I got my fill did I notice the drop. Just a few feet in front of us was a sheer cliff, dropping thirty feet into the choppy water. I looked to my right and I looked to my left, but I didn’t see any way down there. Charlie did, though. He pulled out a machete and cut through some of the brush. Soon we found the path again and we were on our way.

We walked through the jungle till we came to a sheer rock wall. We followed the wall to the edge of the woods, where we encountered another drop. But between the rock wall and the drop into the ocean there was a narrow path. Charlie and Nikki led the way down it. When the path narrowed to a foot or so, I stopped in my tracks. A wave of panic ran through me.

“I’m sure of that,” I replied. “It really couldn’t look any scarier.”

I ignored the magnificent view to my left, clinging to the rock wall while watching my footing on the path. With every step, my feet were slipping out of my cheap plastic flip-flops, but somehow I managed not to trip and fall. I just kept putting one foot in front of the other. Nikki and Charlie far ahead of me, and Dan was right on my back, but I didn’t try to speed up. I wasn’t going very fast, but as least I was going, and that was what mattered.

The path widened after a while. Then we came upon a steep slope covered with spongy black lava rocks, each one the size of a loaf of bread. Nikki was scurrying across and Charlie was already on the other side. I stepped out onto the rocks, and the ground shifted beneath my foot. I recoiled back onto solid ground.

“Did you want me to go first?” asked Dan.

“Sure,” I said. I could tell that he wanted to get in front of me, anyway.

Watching Dan cross did not help my nerves. He stumbled several times, falling down twice. Still, compared to the cliff I just came across, it was fairly tame. I took a deep breath and stepped out.

The rock beneath my right foot shifted, but I ignored it and stepped forward with my left. That rock moved as well but I just kept going, one step at a time.

After a few more steps, I tripped and fell.

“Are you alright?” asked Dan, who had already made it to the solid ground on the other side.

“I’m okay.” My hands were slightly skinned, but I wasn’t bleeding. I looked up at Dan. Nikki and Charlie were now out of sight.

I tried to get up, but the rocks beneath my hands kept shifting as well. I fumbled for thirty seconds or so before finally standing up again. It was then that I discovered that I had moved downhill a good yard or two.

“You need to come back up,” said Dan.

I wanted to say “duh” but I knew he meant well, so I started climbing again. Now I was trying to go up and over at the same time. It was hard. The rocks were very loose, and the harder I climbed the less I moved. I felt like I was walking up a downward escalator. Still I kept going, until a sharp piece of lava rock scraped the bottom of my foot.

I looked down and spotted my shoe, four or five feet beneath me. I started climbing down to get it.

“Is everything okay?” asked Dan.

Going down was easy, but avoiding more scrapes and bruises was much harder. I ended up sliding down on my butt, if only to minimize contact with between basalt and bare skin.

The shoe was just a few feet beneath me, but the tumbling rocks caused it to slide downhill as I went after it. Eventually I caught up, only to find out that the plastic strap was broken. It has popped out of the foam heel, and now the hole was too big to hold it. Thinking fast, I picked up a sharp rock and bore a second hole in the heel. I wedged the strap through and put the slipper back on.

“Why did you wear flip-flops, anyway?” asked Dan.

“I figured it was obvious.”

I tried to climb back up the rocks, curing under my breath. The air was stifling, and I was dripping with sweat. The rocks kept moving beneath my hands and feet, and the more I climbed, the more I stayed in one place.

“Maybe you should take the low road,” said Dan.

I let out a hysterical giggle at the thought of a road that wasn’t as “nice” as the one I had just come from. Then I sat down and took a deep breath, before scooting the rest of the way down to the water.

The water was as warm as it always is in Samoa, with none of the cold shock you get in other climates. This wasn’t a nice sandy surf, though. It was full of rocks and coral. And it got deep very quickly. I immediately tripped in a hole and fell into the water.

My flip-flops came off and floated to the surface. I tried to put them back on, but they were just too buoyant. I took them off and squeezed them into my bag with my snorkeling gear. Thankfully, there was nothing in my bag that I was afraid to get wet. I left all the important stuff — wallet, keys and cellphone — back in Charlie’s truck.

I looked out and spotted a secluded beach off in the distance. It was at least a quarter-mile away. Nikki and Charlie were there already. They saw me and waved hello. I took another step toward them, and immediately fell on some coral. I got back up, took another two steps, and fell again.

I turned around and started walking the other way, still stumbling. It took a minute or two for Dan to notice that I was going the wrong way.

“Where are you going?” he yelled down to me.

“You can’t give up now. You’re almost halfway there.”

“All the more reason to quit,” I replied. “Now how do I get back up to the truck?”

Dan told me that, if I swam around a large rock outcropping, I could find a small path back up to the truck. He told me this and then tried to talk me out of it. I’d like to say that I saw the light and persevered, but I didn’t. Instead, I waded/swam through the coral and rocks, back towards the ledge where we started. I’d had enough for one day, for one lifetime. And while I never went back to Palagi Beach. I’m glad I tried. To this day, I consider it one of my more successful failures.