In the Haze of the Night: Part 3 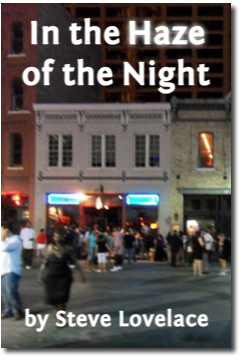 Paul’s half a block ahead as we stumble through the night. I could probably keep up with him, but Heather’s having trouble in her heels.

“How much further is it?” she asks.

Paul stops and waits for us. “It’s just around the corner.”

Three blocks later, we arrive at a modest pub identical to the one we just left. This one has better service at least, and a waitress comes right over to take our order. Just as she walks away, I look over at Heather. She has her hands up to her face, as if trying to hide in plain sight.

“I don’t know who that is,” I say. Before she can respond, I see him walking towards us. He looks a lot like my brother, only a foot taller and a whole lot meaner.

“He’s not my boyfriend, Joey, and neither are you.”

“Come on, Heather. You know you miss me.”

“Well, Ryan, I suggest you watch your back.”

“Of course not,” he says with a big grin that more of a gnashing of teeth than a smile. He takes a step closer and I realize just how big he is.

“Why not? Because of this guy? This scrawny little douchebag? I could kick his ass without even breaking a sweat.”

Out in the Night

He moves in even closer, knocking over a bar stool. In an instant, two big burly bouncers are right up on us. One of them grabs me by the collar and pushes me towards the door. An even bigger bouncer shoves Joey outside right behind me.

Joey looks at me and takes a swing. I dodge him just in time. Then, without even thinking, I hit back. He’s quick but he’s big, and my right hand grazes his shoulder.

The pain is immense, but I don’t have time to feel it. I step back and dare him to hit me. He turns and runs instead.

Joey doesn’t heed my command, and I’m glad. Meanwhile his friends run out of the bar and follow him down the street. They pay me no mind. They’re more concerned with saving their own skins.

Heather and Paul come out a moment later. “What happened?” she asks.

“Nothing,” I say, ignoring the throbbing in my knuckles. “Anyway, let’s go somewhere else. This bar sucks.”

Next: A Movie Ignored