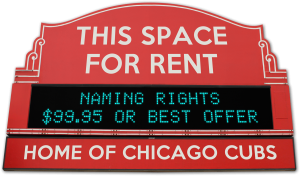 I’ve always been fascinated by naming rights. Nowadays, most stadiums and arenas are named after corporate sponsors. A lot of events are too. Let’s take a look at the history of this phenomenon, and discuss the most effective way to name something after your company.

Naming things after wealthy benefactors is an age-old phenomenon, but modern corporate naming rights date back about a hundred years. It started with Fenway Park in Boston, named after a local real estate agency. Then there was Wrigley Field, so-named because William Wrigley owned both the Chicago Cubs and the Wrigley Chewing Gum Company. But it was in my birthplace of St. Louis that the idea really took off. Anheuser-Busch wanted to name the local ballpark “Budweiser Stadium”, but the Commissioner of Baseball wouldn’t allow them to name the stadium after an alcoholic beverage. Undeterred, Anheuser-Busch proposed naming it after the company’s founders, the Busch family. Once the name Busch Stadium was approved, they came out with a new beer called Busch Beer. In this case, the beer was named after the stadium, not the other way around.

Here in Dallas, our basketball/hockey arena is called American Airlines Center. A couple of years ago I was quite confused when the Dallas Mavericks faced off for the national title against the Miami Heat. The Heat play at American Airlines Arena. I felt a little two-timed when I learned that American Airlines was sponsoring both arenas. After all, they’re based out of Dallas/Fort Worth. What are they doing in Miami? Corporate sponsorship works best when there’s at least a little bit of hometown pride involved.

Naming rights don’t just apply to physical buildings. You can also sponsor events. You see this a lot with college bowl games. These early post-season football games had simple names like the Sugar Bowl, the Orange Bowl and the Rose Bowl. Today these games are known as the Allstate Sugar Bowl, the Discover Orange Bowl and the Rose Bowl Game Presented by Vizio. Then you have the Capital One Bowl, the GoDaddy.com Bowl and the Famous Idaho Potato Bowl. But when it comes to ridiculously long names, you have to look at the world of auto racing.

The Brickyard 400, one of the biggest races in NASCAR, is officially called “Crown Royal Presents the Your Hero’s Name Here 400 at the Brickyard Powered By BigMachineRecords.com”. This race has two different sponsors in its name, along with the name of a first responder honored by the race organizers. With a name that long and unwieldy, everyone just sticks to calling it the Brickyard 400. You have to wonder if the companies featured in the name are getting their money’s worth. People are lazy, and they will continue to call the event by its short name if the full name is too hard to say. And while I like the idea of naming the race after a heroic firefighter, the honor is dissipated by the crass commercialism.

I’ve said this before, but you don’t always control your brand. When people feel strong affinity to a brand, they tend to make it their own. Brands can have nicknames, just like friends. If you’re name is Steven, people will call you Steve, and if your car is called Chevrolet, people will call it Chevy. The same holds true for buildings.

Back in the 1990s, a tech company named 3Com bought the rights to Candlestick Park in San Francisco. A couple of years later, it was named “Monster Park” after a cable manufacturer named Monster Cable. Many people thought  it was named after Monster.com or Montster Energy Drinks instead. Or maybe they thought it was a monstrosity. Because they tried to rename a landmark building, the name doesn’t stick. On the other hand, Barclays Center in Brooklyn has never had any other other name. Barclays bought the naming rights several years before the arena was ever built. This is the effective way to use naming rights.

Is there anywhere in your hometown that’s sold its naming rights to a corporate sponsor, and if so, do most people actually call it by its new name? Let me know in the comment section.