The Wonders of DFW Airport 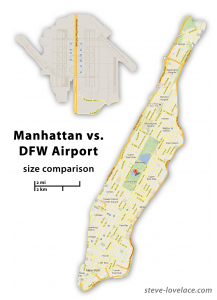 DFW Airport is one of the most fascinating places I’ve ever visited. Not necessarily the most fun, but fascinating nonetheless. I really wish I could spend a couple of days exploring it, but in the modern day of homeland security, that’s not going to happen. Still, I can take a lot of sights in from a simple coach class flight out of Dallas.

First, a little background. The city of Dallas exists on a Cartesian plane. Most cities are wedged in by oceans and/or mountains, but not Dallas. North Texas is a land of wide open prairies, and the metropolis has almost limitless room to sprawl. Thus the designers of DFW were able to build an airport for the ages. The airport currently has five terminals, but the designers supposedly left room for as many as 13. If you look closely while driving through the airport, you will see dead-end approaches for off-ramps that will probably never be built. But should the need arise, the ramps will be there.

An Obstacle in the Metroplex

Of course, all of this redundancy comes at a great cost to the people of the Dallas-Fort Worth Metroplex. The airport is so big that it’s an obstacle, an East River separating the boroughs of Dallas and Tarrant County. The airport hampers east-west travel between the two metropolitan areas. Unlike Minneapolis and St. Paul, Dallas and Fort Worth are not Twin Cities. They are almost as far apart as Baltimore and Washington DC.

An Airport for the Automotive Age

Because the airport was designed at the height of the American automotive age, it is one of the least pedestrian-friendly airports around. To get to DFW from my house without taking a car, it takes a city bus, a light rail train, a commuter train, a shuttle bus to remote parking, and another shuttle to the terminal. Extensions to both Dallas and Fort Worth’s train systems will make it easier in a couple of years, but the physical distance will remain a problem. That’s why Love Field, Dallas’ original airport, remains in business and thriving. With DFW Airport being a good hour or two away from the cities it serves, visiting will always be an experience in and of itself.