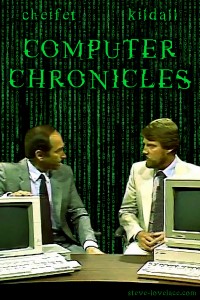 Regular readers of this site will know that I’m big into tech history. I was fascinated by computers as a child and a teenager, and I spend a lot of time writing about vintage computers. If you’re into tech history too, I highly recommended the Computer Chronicles with Stewart Cheifet.

From Local to National

The Computer Chronicles started as a local public television show in Silicon Valley. Back in the early 1980s, it was hard for computer nerds to get information on the tech industry. The Internet was still an academic curiosity, so a half-hour computer show made a lot of sense. Unfortunately, we’ll never see the early local episodes again. They aired live like a public access program. But in 1983, the show got picked up by PBS, slowly gaining traction across the country.

Stewart Cheifet, the producer and host of the program, sought out sponsors for the show, asking around the Valley. One of the companies he solicited was Digital Research, the company behind MS-DOS precursor CP/M. When Digital Research founder Gary Kildall found out about the show, he didn’t want to be a sponsor. He wanted to be a co-host. Kildall’s life story is a fascinating one that I’d like to go into detail later, but suffice to say that he is up there with Gates and Jobs in the pantheon of Silicon Valley entrepreneurs. Kildall’s role on the show gives us an unprecedented insight into the development of the personal computer.

I occasionally watched the Computer Chronicles as a kid. However, it always seemed to be on at odd times, so I never became a regular viewer. And in fact, the show would have languished in obscurity if not for Stewart Cheifet’s decision to donate old episodes to the Internet Archive. Cheifet realized that he wasn’t going to make any money with a bunch of 30-year-old computer shows, so instead of letting the old tapes rot in a closet somewhere, he had them digitized and posted on the Internet. Now you can go to YouTube and see the whole series, from 1983 to 2002.

I have been binge-watching the series for several months now. And I’ll be the first to admit, there are parts of the show that are pretty boring. The Computer Chronicles is a lot “quieter” than modern talk shows, both for better and for worse, and some of the guests are not very charismatic. But as a primary source for computer history, the show is second to none. If you want to watch modern technology develop right before your eyes, I highly recommend the Computer Chronicles.