America and the Metric System 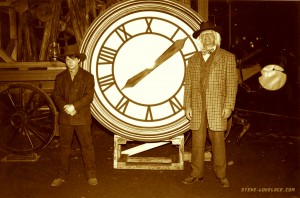 When I was a kid, we watched films about the metric system. (And when I say films, I mean actual reels of film. Most of these movies were made well before I was born.) In any case, these films told us how much better the metric system was than the hodgepodge of inches, pounds and gallons we actually used. In the future, they told us, we would all use metric. So if we wanted to live in a world of flying cars and hoverboards, we better get to know the centimeter side of our rulers.

A decade and a half into the twenty-first century, America is no closer to using the metric system. (We don’t have flying cars or hoverboards either, but then again, neither does anyone else.) In any case, it got me to thinking why the metric system is so slow to catch on here. If it were really as awesome as all those old propaganda films made it out to be, we would have switched over decades ago. But since we haven’t, there must be some advantages to the Customary System. Let’s take a look.

The metric system is based on the the number ten, which makes it easy to convert units from one magnitude to another. (Ten millimeters equal one centimeter; ten centimeters equal one decimeter, et cetera.) But the number ten has inherent disadvantages. It’s only divisible by two and five, so it’s hard to divide a measurement into thirds without worrying about repeating decimals. This isn’t a problem with feet and inches. But I don’t think that’s the main reason metric hasn’t caught on. I think the biggest problem is linguistic.

The English language is a product of the Norman Invasion of England in 1066. After the invasion, the conquered Anglo-Saxons spoke short Germanic words, whereas the ruling Normans used multisyllabic, Latinate words. To this day, the Norman-derived words sound “fancy” to English speakers. For example, “orate” versus “talk”, “mutton” versus “sheep” and “defecate” versus “shit”. Because the metric system uses long Greco-Latin terms, it feels too formal and foreign for everyday use. In fact, the only areas of American society where metric has caught on are in finance, science and military operations. These fields have all used long Latinate words for centuries. The good news is that we can overcome the linguistic barrier. Other English speaking countries have. It’s easy enough to use shorter words that sound more natural in casual conversation, like “click” for “kilometer” or “kilo” for “kilogram”. If they can do it, so can we.

Do you think the U.S. will ever switch to metric? Let me know in the comments.