Hidden Sights in an Office Park 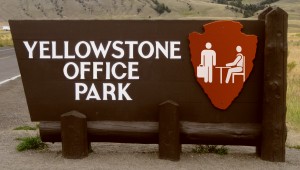 The other day I took a walk. After a tough morning, I needed to get out of the office. I grabbed an apple and started walking around the little office park where my building resides. It’s pretty unimpressive. Just concrete office buildings and concrete parking lots. Even the little creek running through it goes through a concrete ditch. But on a nice day like this, it still beat a brown upholstered cubicle, so I leave the office and take a walk.

I had walked this path many times before, when my train was late and I missed the shuttle to my building. But in the four years of working in this area, I had never stopped to look around. Now that I was walking for fun, I had the ability to explore. Mostly I found concrete, but there was more behind the scenes. I found a pedestrian bridge over the concrete creek. Then I found a parking lot that used to be a tennis court. Both of these I had passed by a million times and never even seen.

These features were unremarkable, but they got me to thinking. I started looking for more hidden features. Soon I found a spot on the edge of the office park where there was a little waterfall. I cut through the grass and turned a corner, where I found a little patio. It faced a pond with a fountain, as well as a country club. It was a secluded spot, though well-trafficked by other office workers on their lunch break. And yet, I never knew it existed.

There has to be some kind of lesson here. Sometimes, the most amazing places can exist right under your nose. So next time find yourself bored with your surroundings, or bored with your life, take a second look around. Maybe, just maybe, you’ll find a hidden treasure.