Fixing the US Constitution 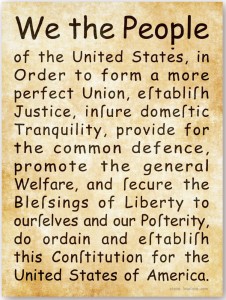 If we learned anything from the watching politics in 2013, it’s that our government doesn’t work right. For the most part, it’s broken because the Tea Party has resorted to anarchist tactics, but the fact that such a small minority could shut down the government reveals more deep-seated problems with the US Constitution. As much as people venerate the Founding Fathers, the constitution they created is a living document, not a piece of scripture. As such, I would propose the following amendments to fix the shortcomings in our federal government:

1. Legislative districts and voting precincts shall be determined by mathematical algorithm.
2. Each state shall appoint a nonpartisan board shall determine the algorithms used.

Gerrymanding is the biggest problem in politics today. Every ten years, the government has to redraw congressional districts to jive with the latest census data. Of course, the politicians in charge of redistricting want to redraw the lines to make their respective districts “safer”. That is, they want to make it so that each district has a strong majority of Democratic or Republican votes. This kind of manipulation has happened for centuries, in this country as well as others. But thanks to improvements in statistics and polling, we can now gerrymander districts to the point where elections hardly make a difference. This has to change.

I suggest two measures to minimize this phenomenon. First, there should be a nonpartisan board in charge of each state’s redistricting, and those boards should do it in the most objective way possible. Nothing is more objective than math, and there are certainly mathematical ways to divide up a state.

1. Congress shall have the right to regulate and limit funds used for federal elections.
2. Campaign contributions from individuals and corporations may be regulated at different levels.

This amendment is designed to fix the issues brought up by the “Citizens United” case. In that case, the Supreme Court ruled two things: they ruled that “corporations are people” and “money is speech”. By those transitive properties, corporations and interest groups can give virtually unlimited amounts of money to politicians, and it’s all covered by the First Amendment.

1. All citizens and residents of the United States have the unalienable right to health care.

As a liberal, it saddens me that Obamacare has been (to date) an enormous mess. The problem with Affordable Care Act is that it’s an ungodly mess of public and private regulation. Rather than try to make every American have health insurance, the US Constitution should recognize health care as a basic human right and provide basic, but decent, health coverage to all Americans.

The US Constitution is over 200 years old. Even if you believe the Founding Fathers had everything right (and the existence of slavery proves they didn’t), things have changed quite a bit since 1789. Back then, they didn’t have computers to manipulate demographics. They didn’t have the powerful corporations that we do, and they certainly didn’t have the medical technology available to people today. As the world changes, the constitution must change with it, lest the whole thing breaks down altogether.

What amendments would you add to the US Constitution? Let me know in the comments.