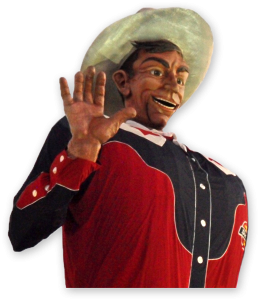 Big Tex is an icon of Fall in Texas

Fall in Texas is an interesting thing.
After several months of summer,
The hellish heat is finally at an end,
And the city awakens from its summer siesta.

The August heat here is brutally hot,
Though sunny September’s not much cooler.
But folks in Dallas still sigh with relief.
As a ninety-degree breeze blows into town.

On the shifting banks of the Trinity River.
A city awaits football and fried foods,
Outdoor festivals and celebrations,
In a heat that still melts the out-of-towners.

On a Saturday morning, we hop on a train.
Already the air conditioning’s pumping.
We follow the crowds down to Fair Park.
Down where the giant cowboy stands.

Football in Texas is a very big deal.
Even nerds like me can enjoy a game.
It’s all a part of the autumn celebration,
Enjoying the outdoors with good friends.

Fall in Texas will still make you sweat,
Ninety degrees in the afternoon sun.
But after the Dog Days of Summer,
Fall in Texas is downright chilly.

But we don’t mind the autumn heat.
We know what real summer feels like.
Putting up with a hundred plus degrees in Texas
Is what makes the rest of the year worthwhile.

What is your favorite season? Mine is autumn, both in Michigan and in Texas, even though the two are totally different. Let me know what you think in the comments.