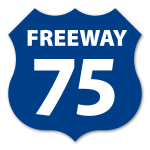 Though I love Route 66, I’m not a big fan of modern US highways. They’re unpredictable. Whenever you see a blue Interstate shield, you know what you’re going to get. Even if the road itself is in bad shape, you know you’re going to get at least a four lane freeway with speed limits of 55+ mph. But when it cones to US Highways, you can get anything from a two lane blacktop to an sixteen lane thoroughfare. 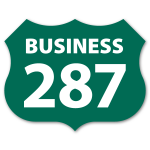 US 287 is a good example of the problems with the US Highway system. Connecting Dallas to Denver, this road cuts through some desolate parts of Texas. In fifteen different sections, it is up to freeway standards. But every once in a while, the speed limit drops from 65 to 25 as it passes through some half-abandoned town. Many of the towns along this route are ghost towns in every 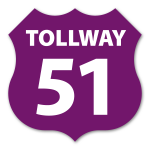 aspect but one — the police station. These obvious speed traps are the only source of revenue holding such towns afloat. Perhaps if they were all bypassed by a freeway-quality road, at least some of the towns would start to come back as edge cities, maybe even tourist attractions. They might also die, but it would still be better than a modern police station surrounded by hundred-year-old ruins. 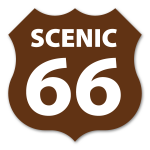 Of course, in this economy, it’s going to be a while before we see these roads upgraded, or even repaired. But there is a stopgap solution. Instead of using the same white shield for all types of highways, why don’t we expand the color palate a bit? For example, US highways that are up to freeway standards could use a blue shield, similar to what we use for interstates, but without the red bar across the top. Roads that cut through towns could use green shields, like we use on interstate loops and spurs. Finally, scenic and historic highways could use brown shields, since we already use brown signs to denote parks and recreation. White US highway signs would remain ambiguous, allowing existing signs to remain standing without a change of meaning. This way, they could be phased out gradually, whenever the money to do so became available.

Are there any other colors we would need for this plan? Do think it’s a good idea? Let me know in the comment section.